What is giant, black and white, eats bamboo and looks like it would be the best thing in the world to cuddle? (Although that hug might leave you short a limb :)  PANDAs!!!!
When we heard that there were pandas at the Madrid  zoo we could not pass up the opportunity to see these rare cuties.
The zoo is very easy to reach from the city and has a great variety of animals to see.
Many of the enclosures are typical and a small few are a little sad. However, the gorilla house was large and informative and the gorillas were so adorable.
Many of the animals seemed to be posing for my camera :)
The peacocks had free range and could be seen strutting all over the park.
Often times it is easy to put the plight of some animals out of mind. We do not see them and so we are less likely to think of how our actions as humans effect their lives.
I am torn on the issue of zoos in general, but from each visit I do leave feeling more aware of my impact and with a renewed desire to do as little harm as possible.
This trip to the Madrid zoo was no exception. There was a very entertaining and educational show put on by the dolphins and the team that works with them.
Seeing the animals who have to live in the oceans we pollute makes children and adults alike more apt to think twice about their actions.
Similarly, it exposes kids to different career paths. My sons were so impressed by the fact that the marine biologist gets to swim with dolphins.  My oldest son said, "It's a win win. You get to help animals and have fun. I want a job like that."
No comments:

Fallas or should I say fires :) Valencia, Spain 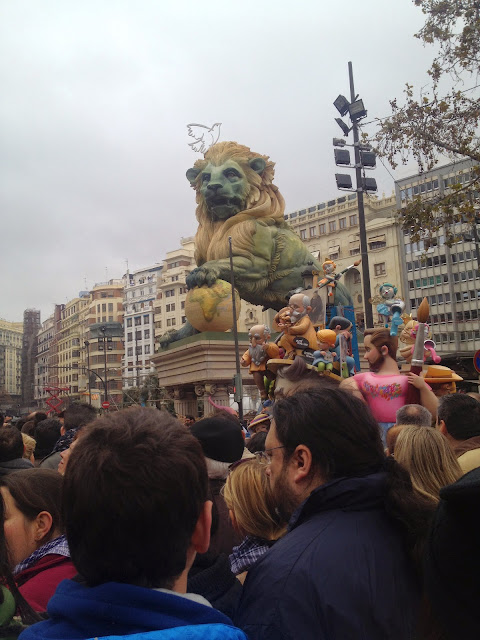 Imagine the Rose Parade mixed with the Fourth of July, throw in a major bonfire, multiply that by 5 and you might have a slight idea of what its like to be in Valencia for the one of a kind celebration of Fallas. 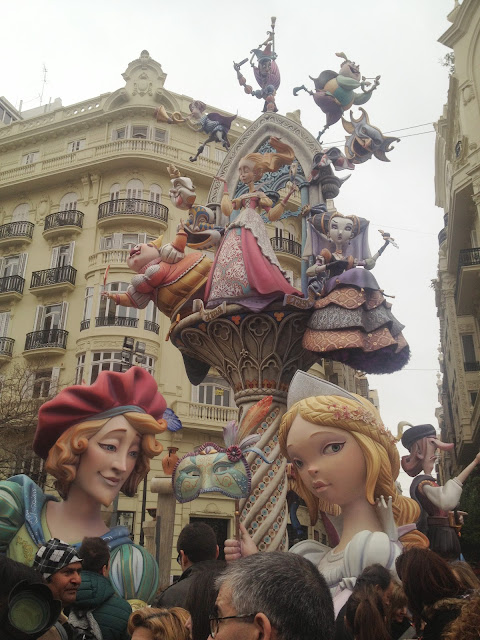 Fallas, derived from the Latin word fax which means torch, is a weeklong festival celebrating all things fire. The tradition is related to the Latin custom of lighting fires to welcome spring. In Valencia a large portion of the population were carpenters and  they began to burn their scraps of woodworking during these spring equinox parties. As Christianity's strong hold began to be felt in Valencia the fires were coordinated with a celebration of St, Joseph the patron saint of carpenters. Today March 19, St. Joseph's day, marks the culmination of five days of parties, parades and pyrotechnics. 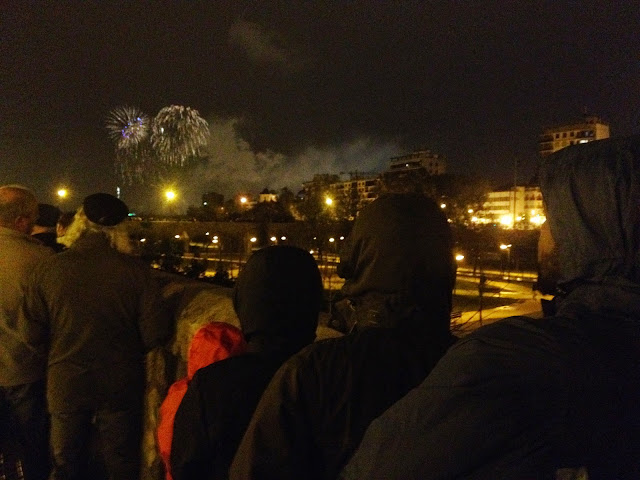 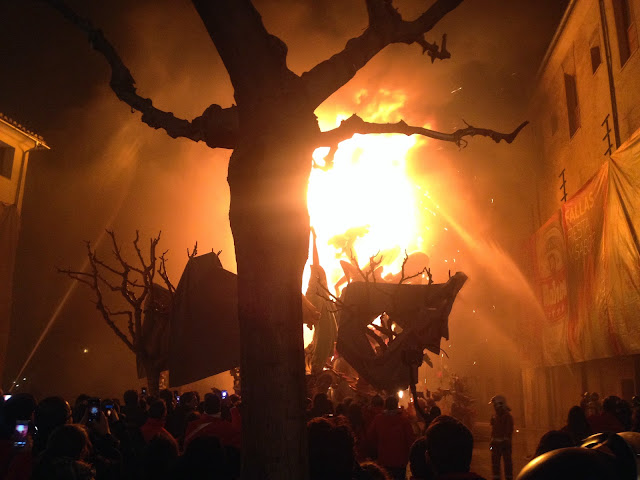 Children, teens and elderly alike roam the streets lighting firecrackers that sound like mini-bombs.   Neighborhoods put on daily displays of firework shows complete with bands and processions of people dressed in their Medieval finery. 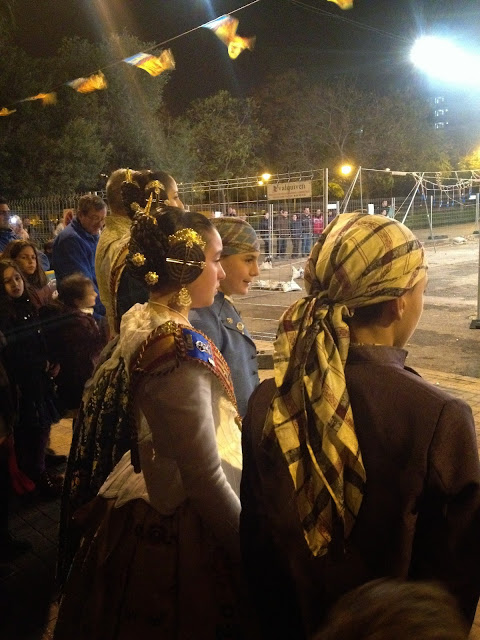 All times of the night and day bangs, booms and burst can be heard all around you. The old scrap wood has given way to elaborate works of art towering high above the heads of the excited spectators as they scurry from fallera  to fallera to witness the remarkable work that took nearly a year to make and will burn in less than an hour. 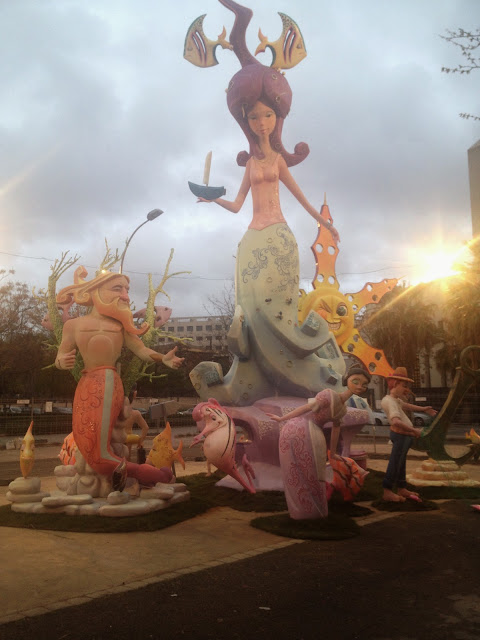 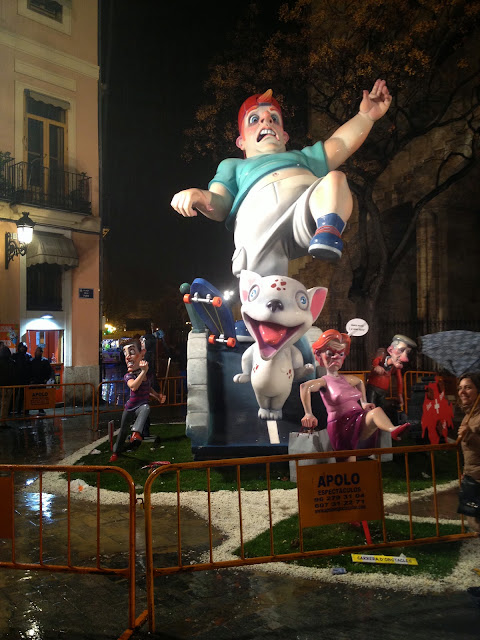 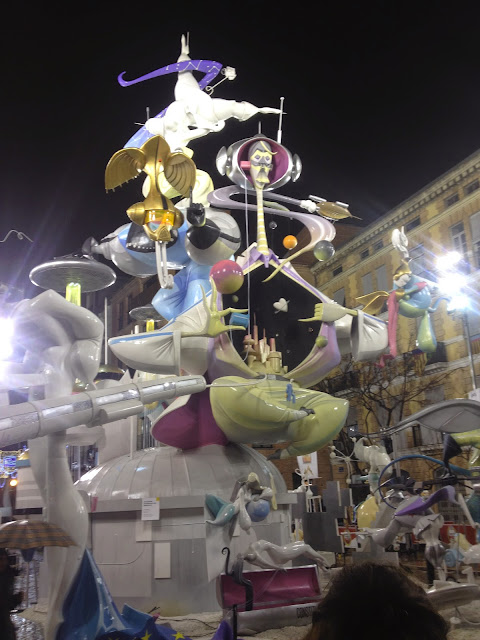 Every afternoon at 2pm city hall has a mescleta, a huge fireworks show, and on the last day the mescleta is on steroids.  My 7 year old said it perfectly "it felt like the end of the world!"  The experience was unreal.  For a few minutes the sky filled with smoke and flashes of red orange and green, stars sprinkled down on us and the noise was deafening. The engery of the huge crowd was palpable as the intensity of the fireworks increased. The excitement rose and grew until it felt like the city exploded into a huge wave of smoke and dust covering the area and the crowd went wild with applause. At the height of it all my 10 year old was screaming with sheer joy and excitemnet and we could not even hear him. 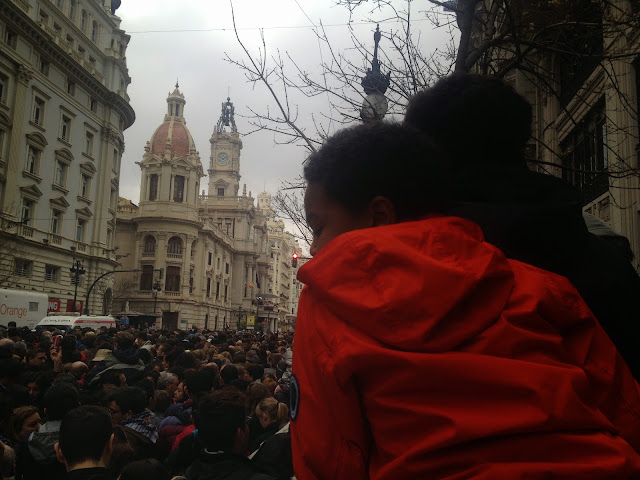 In the wee hours of the morning on the 19 is La Crema, the burning. The smaller fallas are doused in gasoline and burned earlier to the squeals and cheers of the youngest Fallas fans. 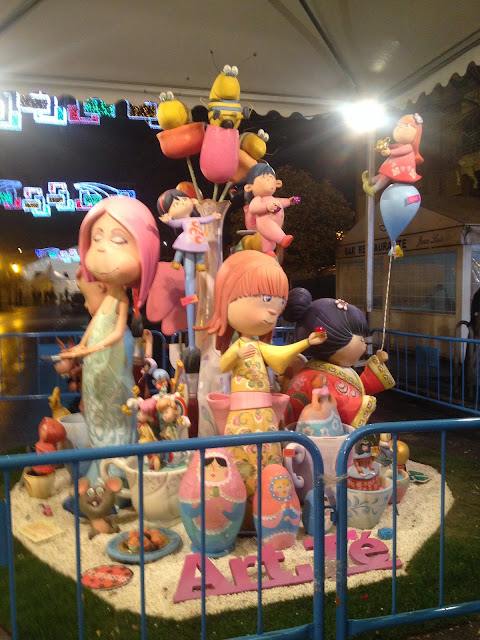 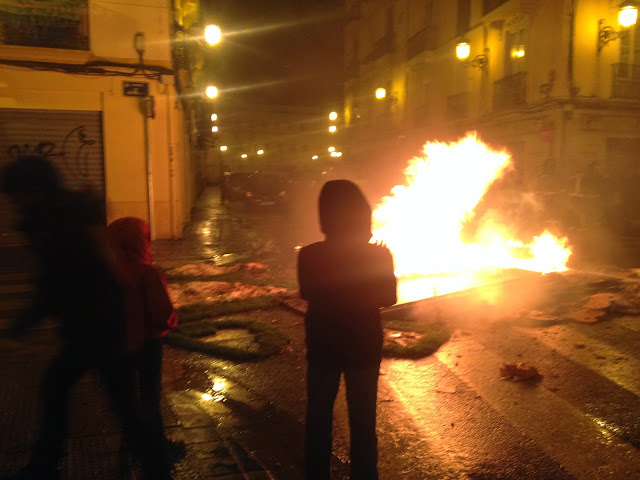 The grand beauties are saved for the end and go up in glorious flames. It was heartbreaking and beautiful to watch. 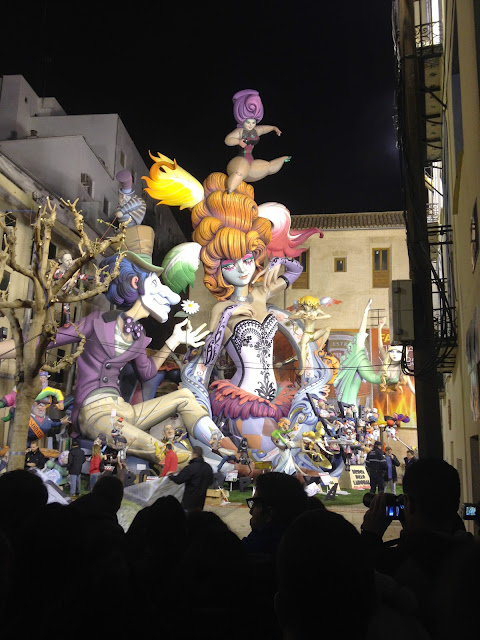 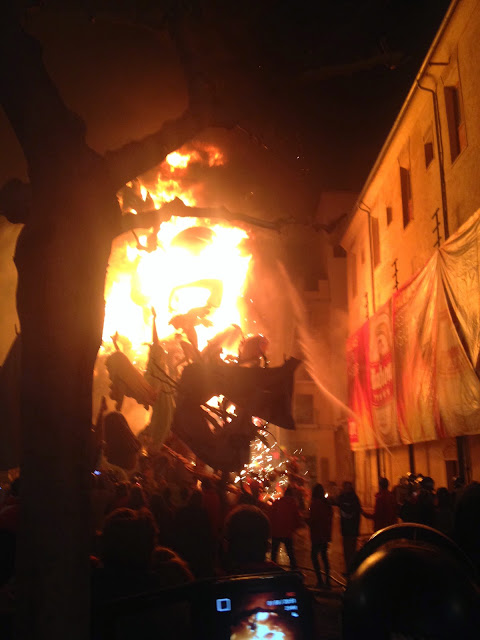 To all the stumblers, browsers, and loyal followers welcome to my little corner of the internet. Thank you for joining me and allowing me to be funny, sarcastic, insightful, reflective and above all else honest. This is my creative and expressive mental baby. I hope you enjoy my post, comment often, and share it with others.

Take care of yourself :)

K
here, there, United States
Either to busy to stop and think about what I'm doing, or to busy thinking to stop and do what I'm thinking about. "I was born to catch dragons in their dens, and pick flowers. To tell tales and laugh away the morning. To drift and dream like a lazy stream, and walk barefoot across sunshine days" James Kavanaugh